Both programs Planetary Aspects and Transits and Heliocentric Planetary Aspects and Transits can be used to calculate the synastry relation between the planets in the natal horoscopes of two people. The synastry relation consists of the set of aspects between the planets in one person's natal chart and the planets in the other person's. For example, consider the astrological relationship between Friedrich Nietzsche and his lover Lou Salomé. The details of their natal horoscopes, in both tabular and graphical form, are given here.

Here is the synastry relationship of the planets in the charts of Friedrich Nietzsche and Lou Salomé, in graphical form: 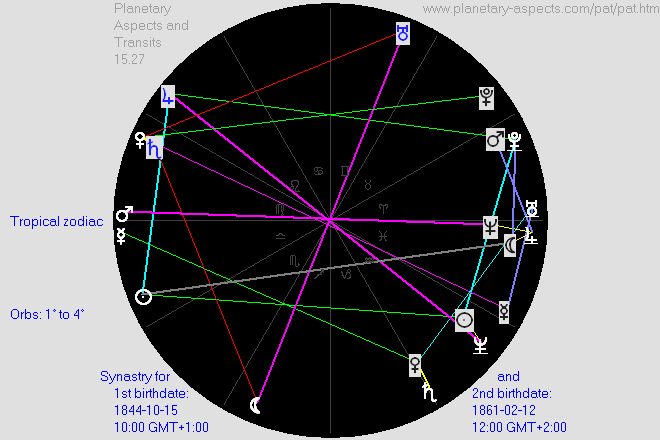 As noted at the earlier page:

Nietzsche's Venus forms four aspects with Salomé's planets, and with seven trines and sextiles and only one square (but that square is Nietzsche's Venus to her Uranus) this might seem an auspicious synastry. But on closer examination what leaps out here is the relations between Venus (the planet of love) and Saturn (the planet of restriction). His Venus is almost exactly (0°45') conjunct her Saturn, and her Venus is almost exactly conjunct (0°47') his Saturn. This does not suggest a successful amatory relationship.

And here is the synastry relationship in tabular form:

The synastry chart is: